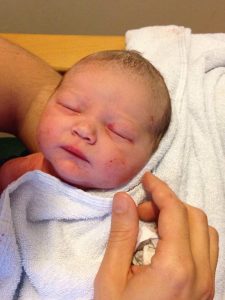 Had a bit of a bad tummy around 11pm, went in the bath. Bit of blood, so by midnight got out of the bath, rang the pregnancy assessment unit at the hospital. They told me to come in at 2am to get looked at. Got my stuff together, went to the hospital – shouted at the OH a lot to stop making the car bounce! Started hurting in the car, every six minutes or so. Walked from the car park to the ward by the time I got there I was hopping from one foot to the other.

Needed a wee – it was all blood.

Got assessed by a doctor at about 2:45 – apparently I was 9cm dilated so needed to go to the maternity ward. Walked/waddled down there and got sorted about 3.30am, was put in a room by Linda – by this time it started to hurt so I asked for pain relief…. to be told it was too late I could only have gas and air.

Got shown the g& a Linda left, started hurting reaaaaal bad in a way I can’t describe. Then I decided I needed a poo – the pressure was all in my behind!

Got a new midwife, Joanne, who was very nice throughout my insistence that I needed a poo, she even let me go to the toilet to try. She had a quick look through my birthplan, noticed that I’d got my mum as birth partner too but she wasn’t there. So she insisted we call her, but i was reluctant to make my mum drive out in the middle of the night on her own ‘ we’ ll call her later’. They asked again about  45 minutes later as I was ready to push!

I didn’t feel that I was really pushing anything, i just remember focusing on my breathing, when the contractions came, putting my chin to my chest and pushing. My legs were in stirrups at this point, so I think I had something to push against.

Fiddly bit was keeping monitors on to monitor baby’s heart rate – they kept slipping and the monitor kept showing his heart rate dropping. Midwife did well not to alert me to her concerns, but she called another midwife in to check the readings… they felt that the baby was falling asleep in the birth canal! I was given a wedge and lots of cold water to drink to wake him up!

They kept quizzing me about my waters breaking, they were sure I’d missed it – i was sure i hadn’t . low and behold something went pop and all of a sudden there was a baby!

Turns out my waters were behind the baby and when they went the pressure helped him out! i knew his head was about out but i was bracing myself for more pushing to clear his shoulders – but alas here he was! Put on my chest, it was surreal! because i thought i still had to push his body out i was not prepared for having a baby on me so soon! i think we just stared at each other for what seemed like an eternity! 2 hours 41 mins of active labour and here he was!

I don’t remember much after that. i got stitched up for what seemed like forever, Mark was sat in the corner with the baby skin to skin, then my mum had a hold and then i had a mars bar. We were in the maternity room for around 5 hours after having him. i got transferred to a ward at about 3. my mum came with me, Mark went home for a sleep and came back in later when my bro and sister in law visited.

My dad had gone to the wrong hospital so missed visiting. i could hear in his voice he was gutted when he realised, but we would invite him over as soon as we were released. which sadly wasnt until the next day.

I think i just stared at the cot all night and tried to crack breastfeeding. I could hear the person in the room sigh everytime the baby cried! was really helpful! she did not say two words to me, she was a delight!

Making a home to raise a baby in