Grocompany – a company five months ago that I’d never heard of, but now can’t live without!

We first had two grosnugs for our little one – born in June, these were ideal and made him feel like he was having a little cuddle – was he heck having his arms fastened in though! I can’t for the life of me find a picture in either the grey one or the white spotty one!

Looking for a nightlight proved impossible too but thankfully I noticed the gro logo and purchased after wasting money on two cheaper ones which were neither use nor ornament! It works off the main light switch and fits over the top of the light bulb! Basically press the switch once for nightlight, press twice for ordinary light. It’s great, such a help for night feeds and changes, it’s light enough to see what you’re doing but dark enough that it doesn’t disturb the little one. We tried 2 of the ones that fit in plugs, one was too light, one too dark – so this is like baby bear’s porridge of nightlights to us! 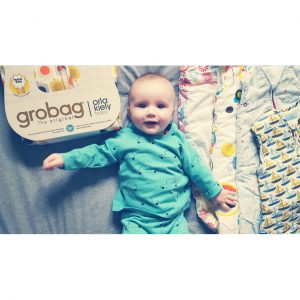 By about two months old, RLT got a bit long for the grosnugs so we moved him in to the grobags – and we’ve never looked back!

As soon as he is in them, whether it is naptime during the day or night time, he knows it is time to go sleep! We have a mixture of side zip ones, front zip ones and ones with travel features – which are great for early morning trips to train station with daddy. We had one given by friends, but the others we have purchased from TK Maxx, Smythes Toy Store and Mothercare – they seem to be the go-to company for sleep bags.

Now grocompany have teamed up with Orla Kiely, I don’t think our association with this company will be ending anytime soon! We’ve already purchased the OK apples in next size up – RLT has boats in his current age.

I’m a massive Orla Kiely enthusiast, my cat is even called Orla Kitty! My clothes are OK, wallpapers are OK, RLT’s cotbedding is OK, if she designs it, we probably have it!