Mark has gone to see NFL’s The New York Giants at Twickenham today. He said he can’t wait to take #rlt with him – but he’s already seen them, I have a certificate to prove it! 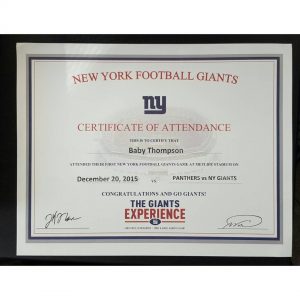 When I was three months pregnant, we decided to go to New York for 10 days over Christmas – we wanted to get away as we weren’t looking forward to Christmas for a reason very personal to us and we thought it would be our last opportunity for a while – taking a child away from family at Christmas was never going to be a popular choice! Mark was adamant that he was going to get to an NFL game while he was in America and thankfully Stubhub helped us do just that. So on 20th December we went over to New Jersey to see NYG play again the Carolina Panthers. 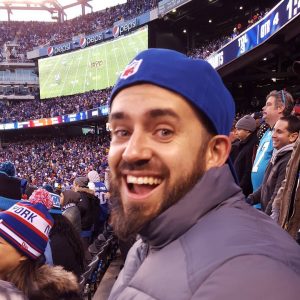 The guy looking after our section, I guess as security, was called Johnny, he looked a bit like Richard Gere and was lovely. We told him it was our first game so he told us to go to guest services to get a certificate – so we decided to get one for the baby as he was technically there with us! (we didn’t know he was a he until a month later).

You have to write your name on a piece of paper at guest services and they print the certificate for you… I wrote baby as obviously we didn’t have a name for the baby yet – the woman handed it to me and said “here you go, Baby” well, we were absolutely creased at this, as in America I guess it isn’t all that of an unusual name for a woman!

Some fella called Rubin scored the first touchdown too… Ohhhh that is a sign, we thought. We liked that name already!

Any tourists reading this… if you’re trying to work out how to get to the Giant’s stadium, the bus people in the depot are the most unhelpful people ever and there are no signs. The queue for the bus on the way back is an absolute pain as well – so if you have an alternative way of getting there, use that!