Rolling! So at day 135 on this earth, RLT decided it was time to roll over. Fortunately, I managed to capture the first time on video!

Quite a nice end to his daddy’s week at home. I was very pleased he did it while his dad was at home, the less moments we miss due to working life, the better (I’m dreading getting the call from my mum when he walks and I’m at work, as I go back when he is eight and a half months old! But at least he’ll be with mum and his cousin Ted who will praise him). 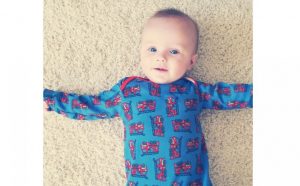 He rolled a few times late afternoon, but soon tired himself out. I didn’t expect him to be rolling so soon, the information I’ve seen said it can happen as early as 4 months, but I always thought boys were a little late to the party on most developmental milestones. But nope 4 and a half months and here he is rolling around on the rug!

This morning (the day after he first did it) he has been unstoppable! It is like something just clicked. Absolute madness to think 24 hours ago he couldn’t do it!

The Grocompany – our new obsession