Still can’t watch when I sit and video the under water swims at Waterbabies. I know it is in RLT’s best interests to go, as I definitely don’t want him to be like me around water. I can’t even put my face under the shower for fear of drowning (my Uncle did push me in a swimming pool when I was 6 and I almost drowned, so it is totally irrational). 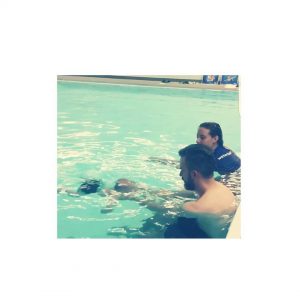 RLT loves the bath – especially when Daddy does bathtime, so it is great that their bond around water gets further established through Waterbabies. I think it has provided them with a real chance to bond and have something for themselves where my interference is kept to a minimum.

He started when he was just under three months old, which I feared was a little too late, but in fact, I think it was actually too early. Many of the babies who are 6-8 months old are getting much more enjoyment out of it – so we think we will delay putting him through chapter two for the time being. That and with Mark changing jobs, we don’t know if he will be available every weekend to take him and I am DEFINITELY not doing it! No way, Jose!