I’ve had the most awful experience of trying to report faulty goods to Maclaren Customer Service that I felt compelled to write about my experience.

Maclaren no longer will deal with customers or service centres over the phone, they will only work through digital platforms. No problem you’d think in this day-in-age, but what do you do if your local service centre doesn’t use email? This made a massive problem for me and the subsequent responses from Maclaren (or lack of) made me astounded as to how they treat customers with product issues.

I purchased my Maclaren Orla Kiely quest in January 2017, only to notice that there didn’t seem to be enough material to support the mechanism of the foot rest, therefore the underside of the buggy material was ripped on both sides. Fearful that this expensive pushchair was going to completely rip or catch something and create irrepairable damage, I contacted Maclaren through twitter who advised me to email them with the problem. I did so, to then have a generic link to service centres sent to me. 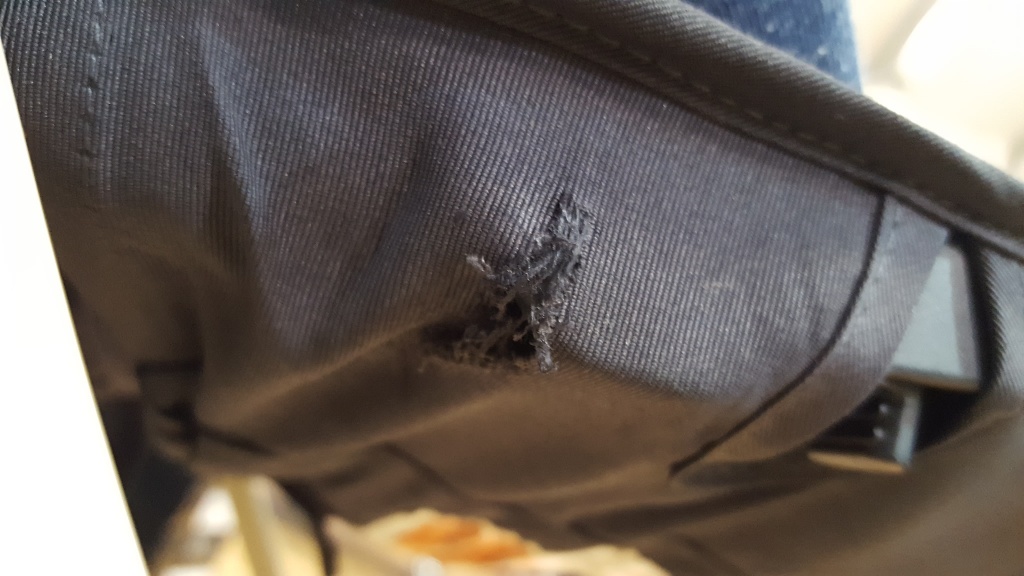 These tears started appearing shortly after starting to use the pushchair. Not what is expected of an item with RRP £295

I went to my local service centre to be told they no longer were working with Maclaren, but they had not been successful in getting their details removed from their website. Weird I thought, as I’d contacted them via Facebook beforehand and they’d never mentioned this, however, they were keen to discuss over the phone my problem (I thought I’d struggle to explain so took it to them on my lunch break).

The gentleman in the service centre advised me I’d need a replacement as it couldn’t be fixed and got out his contacts book to call the numbers he had, only to find every number he had previously used having a voice message to email. He advised that he had previously had issues with getting in touch with Maclaren, which had led to his decision to no longer work with them, sentiments which were echoed by another service provider he called for advice.

After an hour in his store and refusing my requests to send an email to Maclaren on my behalf, he advised me to go to another service centre around thirty miles away, as he didn’t have any further time to help me. This was not only unhelpful but not possible (I’ve only got a full-time job and a small child, so finding the time to drive thirty miles in the opposite direction to work and home was difficult). He was unwilling to put anything in writing, so my efforts had stalled. He took my details and said give him 24 hours and if I didn’t hear anything else from him he couldn’t help. This I felt was a tactic to get me out of his shop and it is now a month later and I am still to hear from him, so believe this was a fair assumption. I tweeted Maclaren a few times whilst I was in the service centre, as well as emailed them, but these appeared to be automated responses as they were not addressing my question of ‘can the service centre ring you as he doesn’t use email’.

24 hours later, didn’t hear anything from the service centre (shock horror) so I contacted Maclaren again through their live chat system online, wanting to converse with a real person and not an auto response which I was getting from email and twitter. The responses I got were really unhelpful. I was told the service centre could use a platform to report it, if so the service centre weren’t aware of this, neither were others he called for advice. There was absolutely no solution other than email.

The person I was talking to kept giving me the phone number of the service centre rather than a customer service phone number despite me repeating my problem quite a few times. The chat just got worse. At one point the person told me they were responsible for the German market, like it was my issue he was on the live chat for his company!

Here how the chat ended as it was emailed to me afterwards (Nicola being me):

I emailed the UK person as Benjamin suggested on 6th July and to date, I have not had a response. I know it was delivered as she had an out of office on, which stated she returned to work that date.

As I had such a terrible experience, I decided that I couldn’t face going round in circles like this again. This product retails at £295, it isn’t exactly pennies. So I contacted Boots, which is where I bought the goods from and explained the situation. Boots organised a refund for me as they stated that they no longer stocked the item.

I then went to Mothercare to try out some new pushchairs and told them of my experience. They also shared their concern of Maclaren customer service and said that they had three ongoing customer complaints that had not been dealt with adequately. If someone the size of Mothercare is having issues, one little guy like me has no chance.

I felt the entire customer service experience (or lack of) from Maclaren was disgusting. A few other people have also had issues which I found here.

There are several negative reviews of the product on Amazon too, which is a shame as it is damaging the reputation of my favourite designer Orla Kiely by association.

This is completely my own opinion, based on my own experience and I’m sure many other people have had positive experiences.

Planning Tips For Your First Family Holiday Away